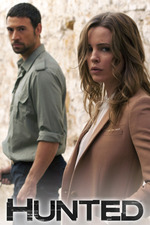 Award-winning writer and producer Frank Spotnitz ("The X-Files") is behind this eight-part suspense thriller with an international espionage story line. Melissa George stars as Sam Hunter, an operative for an elite private intelligence firm who survives an attempt on her life that may have been orchestrated by members of her own team. She goes into hiding to regroup and recover from her injuries, returning to the firm unannounced a year later. Her co-workers, needless to say, are surprised to see her, especially her colleague -- and secret lover -- Aidan Marsh, and her bosses, Rupert Keel and Deacon Crane, who are suspicious of Hunter's motives. But Keel and Crane need their best agent for important assignments. Hunter, meanwhile, isn't sure who she can trust, but she's positive someone wants her dead.