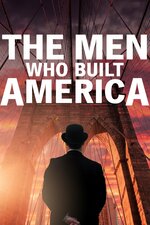 The Men Who Built America

The Men Who Built America is now available to stream and watch online:

The Men Who Built America Episodes

Watch episodes of The Men Who Built America online:

Cornelius Vanderbilt, John D. Rockefeller, Andrew Carnegie, J.P. Morgan and Henry Ford are names synonymous with innovation and big business in America. They all built empires and created advances in technology. They helped shape the country in its early days by doing things such as developing the models for modern railroads, creating the modern financial system and making cars accessible to the masses. The men came from meager beginnings to build their respective empires, which helped formulate the concept of the American Dream. This series profiles the lives of these early visionaries and includes perspectives from such modern business icons as Mark Cuban, Alan Greenspan, T. Boone Pickens and Jack Welch.