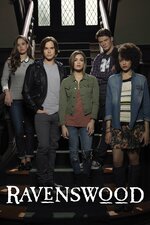 Ravenswood is now available to stream and watch online:

When Caleb Rivers heads to Ravenswood, a town near his hometown, to help some friends who went there to crash a party, he meets kindred soul Miranda. Caleb and Miranda quickly become friends and he decides to stick around Ravenswood to help her out. But Caleb has second thoughts about his decision after meeting Raymond -- Miranda's cold, unwelcoming uncle -- and having unpleasant interactions with local Luke, who struggles to deal with a recent family tragedy and its subsequent scandal. But Caleb ultimately works with Miranda, Raymond, Luke and Luke's twin sister, Olivia, to dig into Ravenswood's dark past to investigate a curse that has plagued the town for generations.