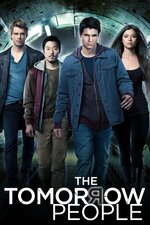 When Stephen Jameson starts hearing voices and teleporting in his sleep, he believes he is going crazy. In desperation, he listens to one of the voices and is led to a group of genetically advanced teens known as the tomorrow people, who are being hunted down by Ultra, a paramilitary group of scientists headed by Dr. Jedikiah Price. Torn by an offer from Price -- having a normal life among people he belongs, but in exchange for helping rid the world of tomorrow people -- Stephen chooses the higher road despite its probable surprises.