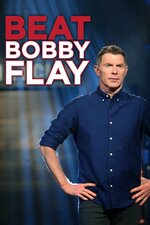 Bobby Flay is no stranger to culinary competitions, whether he's hosting ("Bobby's Dinner Battle") or competing ("Throwdown With Bobby Flay"). In this program he does both. Each half-hour episode begins with two chefs competing to create a dish using an ingredient chosen by Flay. The winner of that challenge -- as determined by a special guest judge -- goes to the second round, in which he or she does battle against chef Flay. To make things a little more fair, the challenger has an advantage by being able to prepare a signature dish that is unknown to Bobby until the start of the round. Once he learns what the dish is, Flay must immediately come up with his own version. A panel determines the winner of the second round through a blind taste test. Food Network regulars Sunny Anderson, Anne Burrell and Giada De Laurentiis are among the judges appearing on the show.