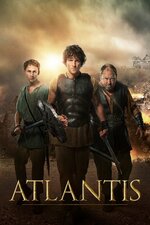 Atlantis is now available to stream and watch online:

Jason washes up on the shores of a mysterious and ancient land that is full of bull-leaping, snake-haired goddesses and vast palaces. It is the land of Atlantis. Beneath its surface lies a dark past and a web of treachery. While there in search of his father, Jason becomes embroiled in a perilous game of politics and power from which there is no escape. Assisted by studious Pythagoras and overbearing Hercules, he embarks on a voyage of discovery and salvation that takes the trio through many Greek myths and legends.