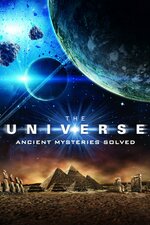 Find out where to watch The Universe: Ancient Mysteries Solved tonight at the American Streaming Guide

The Universe: Ancient Mysteries Solved is now available to stream and watch online:

Thanks to modern technology, we know more about the universe now than we have at any other point in history. Even though they didn't know much about it, ancient people were fascinated by the cosmos. This docuseries examines some of the mysteries from the past and tries to use current scientific knowledge to finally provide answers for them. The mysteries that are explored include the possibility that Stonehenge -- which has stood in England for thousands of years -- was originally used as a prehistoric astronomical observatory and whether certain astronomical events were omens of bad things to come.