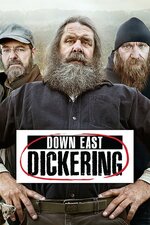 Down East Dickering is now available to stream and watch online:

Who needs Craigslist when you have Uncle Henry's? Never heard of Uncle Henry's? Then you probably don't live Down East (in Maine), because it's a popular magazine filled with classified ads. This reality series follows some colorful locals -- known as dickerers -- who use the periodical to live on their own terms, without such hassles as bosses and rules getting in the way. They look through its pages to find odd jobs, crazy trades and unique ways to make a quick buck. Tony, Clint, Yummy and the rest of the group treat Uncle Henry's as their bible and check each new issue, published on Thursday. If they're short on cash, they use items like a bucket of hubcaps or a bushel of pears as currency to barter with someone to get what they want. And if something needs fixing, swapping or selling, they likely have the skills to get it done and achieve their goals: Spend a little, make a lot, and do it before the next guy.