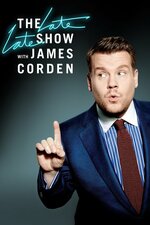 Broadway, television and film star James Corden takes over the reins of the late-late-night franchise at CBS from fellow U.K. import Craig Ferguson. The British performer -- whose previous hosting gigs include five years of The Brit Awards -- puts his charm, warmth and creative instincts to use as he interviews celebrities and newsmakers, and hosts musical performances in his post-"Late Show" time slot.