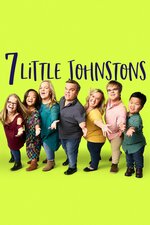 The Johnstons -- all seven -- of Forsyth, Ga., are the subjects of this reality-documentary series. The brood, TLC says, are "the world's largest known family of achondroplasia dwarfs." Achondroplasia is a genetic disorder of bone growth, but the series demonstrates that size only matters in the amount of love the Johnstons provide. Trent, a grounds supervisor at a local college, and housewife Amber have two biological children -- Jonah and Elizabeth -- while Anna, Alex and Emma were adopted from Russia, Korea and China, respectively. Episodes deal with everything from high-drama soccer tryouts to a disastrous attempt at a "birds and bees" discussion, all framed by the family tackling a massive renovation of their 6,000-square-foot, circa 1891 home.