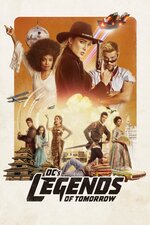 "Arrow" and "The Flash" have some new superhero company in the CW's lineup with the addition of "DC's Legends of Tomorrow." After seeing what doom the future holds, time-traveling rogue Rip Hunter realizes heroes alone are not enough to prevent the impending catastrophe that threatens not only the planet, but all of time itself. Tasked with recruiting both heroes and villains, Rip brings together a ragtag team of divergent talents, which includes the likes of Sara Lance, Ray Palmer, and Heat Wave.