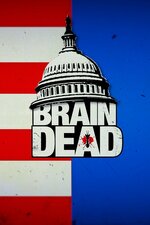 BrainDead is now available to stream and watch online:

Laurel knows the U.S. governmental system has its issues, but when she starts her first job on Capitol Hill, she quickly learns things are much further gone than she realized. Washington, D.C., has been invaded by aliens that have come to Earth and are dining on the the brains of a growing number of Congressmen and staffers, bringing operations to a standstill, and it's up to her to figure out what exactly is going on and stop it. Among those helping Laurel are Rochelle, a medical resident who lost her father to a mysterious infection, and Gareth, a Republican senator's smart and hard-working Legislative Director.