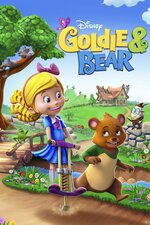 Everyone is familiar with the story of "Goldilocks and the Three Bears," but there's never been a follow-up that lets people know what happened after Goldilocks found the porridge that was just right. "Goldie and Bear" fixes that by reuniting the girl with Bear as they begin a new, unexpected friendship. Along with their friends and neighbors -- who are all taken from popular storybook tales -- Goldie and Bear seek out fun and adventures, which include helping Jack and Jill get up that infamous hill and rescuing Humpty Dumpty after his great fall. While the episodes might be filled with fairy-tale characters, they provide valuable real-life lessons for children, including how to develop friendships.