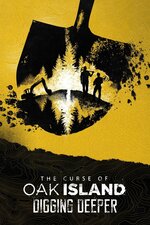 Add to my Watchlist
Find out where to stream and watch The Curse of Oak Island: Digging Deeper at the American Streaming Guide

"Digging Deeper" offers enhanced episodes of "The Curse of Oak Island," featuring additional information and previously unseen footage. For those new to the story, Oak Island is a tree-covered island on the south shore of Nova Scotia that has intrigued treasure hunters for more than 200 years. It is believed that the island is hiding one of the greatest treasures of all time, but no one has been able to find it. Enter Rick and Marty Lagina, brothers from Michigan who have bought the rights to much of the land to try to solve the mystery. The two use modern technology and good old American know-how to look for the treasure. But it won't be easy as the search is expensive and dangerous -- several people have died trying to strike it rich on Oak Island, inspiring the titular curse. The Laginas hope to avoid the curse long enough to find the treasure before they run out of money... or worse.