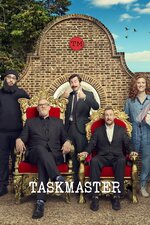 Greg Davies is the "Taskmaster" in this game show that challenges the wit and wisdom of five comics, who are all putting their reputations on the line. Sidekick Alex Horne assists Davies in setting up unique and ridiculous tasks for the competitors, which include painting a picture of a horse whilst riding a horse, and making a portrait of a celebrity using only toilet rolls. The competition is further charged up by the fact that the prize pot is made up of each person's personal possessions, which they lose to the overall winner.