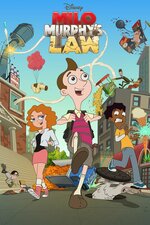 Murphy's Law states that anything that can go wrong will. That doesn't bode well for 13-year-old Milo Murphy, a descendant of the man for whom the law was named, and who feels like he's living it. Milo is always expecting the unexpected. He's prepared for anything that comes his way, though, as he is armed with knowledge, a backpack full of supplies and a strong sense of optimism to help him get through any problem. Milo has best friends Melissa and Zack by his side to help think outside the box to overcome the obstacles that life puts in their way. Multiple Grammy winner "Weird Al" Yankovic provides the voice of Milo, in addition to performing the show's theme song and other tunes featured on the animated series.