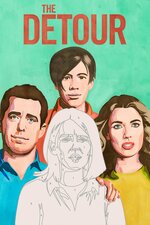 The husband-wife team of Jason Jones and Samantha Bee, longtime correspondents on "The Daily Show With Jon Stewart," executive produce a comedy series inspired by their own experiences with family vacations. Jones stars as Nate Parker, who plans an adventure of a lifetime -- a road trip to Florida -- with wife Robin and their young kids, rebellious daughter Delilah and simpleton son Jared. Packed in cramped quarters, the 1,300-mile journey soon detours into disastrous territory as the family encounters one hellish turn after another. Subsequent seasons see the Parkers make detours to New York City and Alaska, among other adventures.