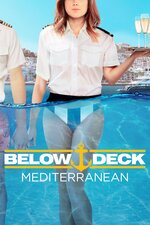 The "Below Deck" franchise sets sail with a new boat, crew and location in this series that follows nine members of a crew who live and work aboard a 150-foot yacht. As the ship journeys through the Mediterranean, each episode features a new group of elite passengers, with each group presenting a different set of challenges for the crew. Leading the ship's team as captain during this series' run have been Mark Howard, a veteran of nearly 30 years on yachts, and Sandy Yawn, one of the few females in the yachting industry to hold the position. Other crew members include chief stewardess Hannah, who sees the Mediterranean as the ultimate location for yachting.