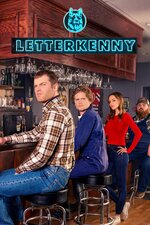 This comedy series showcases the antics of the residents of Letterkenny, a small rural community in Canada. Siblings Wayne and Katy run a small farm and produce stand, with Wayne's friends Daryl and "Squirrely" Dan helping out. Many of the town's inhabitants fall into one of several groups, which include the farmers, or "hicks," the out-of-towners on the local hockey team, the local drug addicts and the "natives," who are members of the local First Nation. "Letterkenny" began its life as a YouTube series called "Letterkenny Problems."