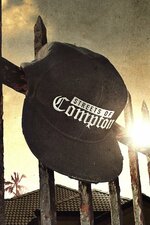 Streets of Compton is now available to stream and watch online:

A&E Network's three-part documentary presents a historical look at Compton, Calif., through the eyes of current and former notable residents. Rap star The Game and other celebrities revisit and reflect on their former hometown, a predominantly white, conservative suburb of Los Angeles in the 1950s before becoming ground zero for notorious gangs like the Bloods and the Crips 30 years later. The series illustrates how the iconic music, culture and style that came out of the area in the 1980s and early '90s were influenced by the drugs, gangs and political turmoil of the time. Other Compton notables featured are actress Niecy Nash, comic Paul Rodriguez, musicians Lil Eazy-E, DJ Yella and Arabian Prince, former mayors Omar Bradley and Eric Perrodin, and members of the Compton police department gang unit.