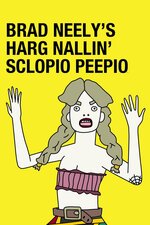 Writer Brad Neely, whose credits include popular animated series "South Park," created this animated sketch-comedy series that is made up of short -- some lasting just a few seconds -- skits, films and songs. Each 15-minute episode includes voiceover work by a guest star, joining a cast that includes Neely, who describes the show as "lots and lots of little bits crammed into a show." If you're trying to find some meaning behind the show's seemingly nonsensical title, don't bother. Neely says it's "intentionally meaningless" and just a favorite collection of syllables among the show's crew.