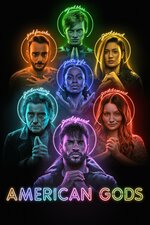 Ex-convict Shadow Moon roams a world he doesn't understand, left adrift by the recent, tragic death of his wife. Little does he know his life is about to change after he meets a crafty, charismatic con man named Mr. Wednesday, who offers Shadow a job as his bodyguard. As their journey begins, Shadow encounters a hidden America where magic is real and fear grows over the ascending power of New Gods like Technology and Media. In a grand plan to combat the threat, Mr. Wednesday attempts to unite the Old Gods to defend their existence and rebuild the influence that they've lost, leaving Shadow struggling to accept this new world and his place in it.