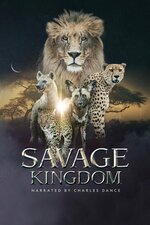 In an ancient land a battle for survival plays out like a "Game of Thrones" episode, but the warring clans here are lions, leopards, hyenas and wild dogs. Set in the remote wilderness of Savute, Africa, "Savage Kingdom" is a rare look at rival animal factions fighting for decreasing resources in a parched region. Complete with brutal violence, unexpected deaths, surprising characters, and even romantic interludes, each episode is told from one predator's point of view. The result is a dramatic, character-driven story shot by award-winning Botswanan filmmaker Brad Bestelink. Emmy-nominated actor Charles Dance narrates the miniseries.