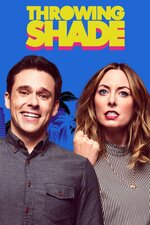 Throwing Shade is now available to stream and watch online:

Based on a popular podcast that began in 2011, "Throwing Shade" is a weekly series that looks at current events from a unique perspective. Hosts Erin Gibson and Bryan Safi discuss the week's hottest topics -- from politics to celebrity gossip -- and "treat them with much less respect than they deserve," according to the network. In addition to the hosts sharing their thoughts, they are joined by special guests who join the conversation. Also featured are comedic sketches that satirize current events.