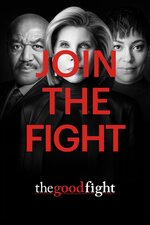 The CBS All Access series picks up one year after the events in the final episode of "The Good Wife." After a financial scam destroys the reputation of young lawyer Maia Rindell and wipes out her mentor and godmother Diane Lockhart's savings, the two are forced out of Lockhart & Lee and join forces with Lucca Quinn at one of Chicago's pre-eminent law firms. At Reddick, Boseman & Kolstad, Diane finds familiar faces, including Colin Morrello, who is a rising star in the state's attorney's office, and Marissa Gold. Though starting at the bottom, Diane and Maia are determined to rebuild their careers and lives at the new firm.