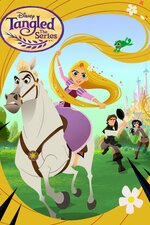 Find out where to watch Tangled: The Series tonight at the American Streaming Guide

Rapunzel is destined to one day assume the role of Princess of Corona, but she's not ready for that yet. She realizes that there is so much more she needs to learn about both herself and the world before she can take on the responsibility associated with being princess. So she goes on a journey to ready herself for eventually ascending to the throne and is joined along the way by partner-in-life Eugene, no-nonsense and dutiful horse Maximus, and tough-as-nails friend and confidante Cassandra. "Tangled: The Series" is a follow-up to 2010's "Tangled" with Mandy Moore and Zachary Levi reprising their roles of Rapunzel and Eugene (formerly Flynn Rider), respectively, from the film. The animated series features music by Oscar-winning composer Alan Menken and Oscar-nominated lyricist Glenn Slater, who both worked on the movie.