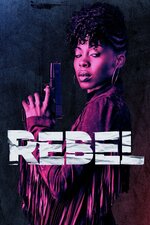 Rebel is now available to stream and watch online:

Described as a complicated and morally ambiguous drama series, "Rebel" -- executive produced and directed by John Singleton ("Boyz n the Hood") -- examines conflicts police officers of color encounter during a time when departments are dealing with charges of brutality and misconduct. Featuring many issues ripped from headlines, the story centers on Rebel Knight, a tough, intelligent, well-respected Oakland detective who has solved more homicides in the last three years than any of her peers. However, once Rebel becomes the focus of an intense internal affairs/criminal investigation involving the shooting of her little brother, she is forced to leave her job. Continuing to fight crime as a private eye, Rebel struggles with her brother's murder while defending herself from the dirty cops who are out for revenge.