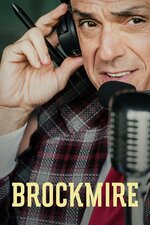 Hank Azaria and Amanda Peet co-star in "Brockmire," a half-hour comedy series that began years ago as a viral short video on the Funny or Die website. The series centers on the fall of Jim Brockmire, a once-famed major league baseball announcer who suffers an embarrassing on-air meltdown caused by his wife's serial infidelity, leading to a decade away from the booth. Older and presumably wiser, Brockmire attempts to reclaim his career, reputation and love life by returning behind the mic, but the setting -- a broken-down rust belt town, home of the minor league's Morristown Frackers -- is not quite what he envisioned. Strong-willed, hard-drinking owner Julia James has a complicated relationship with Brockmire, while whiz-kid intern Charles is simultaneously entertained by and terrified of the new announcer.