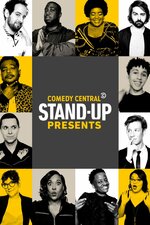 Add to my Watchlist
Find out where to watch Comedy Central Stand-Up Presents... tonight at the American Streaming Guide