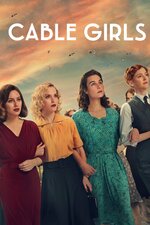 It's the 1920s and Spain has just gotten its first national telephone company, located in Madrid. For four young women who get jobs there, it's more than just work. It represents progress that is being made at the time as women are gaining more equality with men. This drama series follows the ladies, known as "cable girls," who feel attached in different ways -- to their families, their partners and their memories.