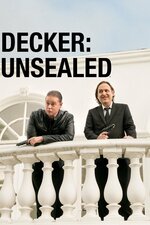 Find out where to watch Decker: Unsealed tonight at the American Streaming Guide

Decker: Unsealed is now available to stream and watch online:

In this entry in the "Decker" franchise, President Davidson Jr. recounts some of Jack Decker's patriotic adventures to the hero's son and protege, Jack Decker Jr. While they are talking about the past accomplishments, a powerful enemy starts to plot against Decker Jr. to avenge the murder of his father. "Decker" co-creators Tim Heidecker and Gregg Turkington star in the live-action series as Decker Jr. and CIA codebreaker Jonathan Kington, respectively.