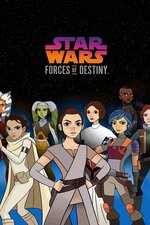 Add to my Watchlist
Find out where to stream and watch Star Wars: Forces of Destiny at the American Streaming Guide

A galaxy far, far away brings loyal viewers "Star Wars: Forces of Destiny" off of Disney's YouTube channel. The main focus will be on some of "Star Wars"' most inspiring and beloved of characters. Join Princess Leia, Rey, Ahsoka Tano, Jyn Erso, and other strong female characters. The series explores different eras and will showcase how each character's decisions affect her destiny. These are an all-new series of animated shorts and explores characters' adventures. Choices, both big and small, will shape the destinies of these beloved characters.