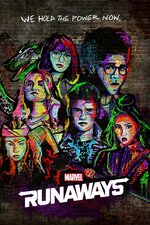 There are times when pretty much every teenager thinks his or her parents are evil -- but what if it was actually true? That's the situation six Los Angeles teenagers find themselves in when they stumble upon a terrible secret and realize that their parents have been lying to them for their entire lives. The offspring begin an investigation to try to figure out what their guardians are after, while the adults wonder if their kids are hiding secrets of their own. The unlikely crew of teens bands together -- led by de facto leader and primary strategist Alex Wilder -- to stop their parents before it is too late. The Marvel series is from executive producer Josh Schwartz, whose resume of young-adult fare includes "The O.C." and "Gossip Girl."