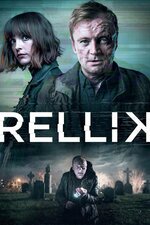 "Rellik" unravels the obsessive hunt of U.K. police detective Gabriel Markham to find the serial killer who left him both physically and mentally scarred. Telling the tale backward, it begins with the capture of the killer, and reverses from kill to kill to the very beginning of the murderer's spree. Gabriel and his partner, Elaine, form an unlikely duo, with Gabriel pulling out all the stops to track down the person that left him disfigured, and Elaine the bright yet eager-to-please sidekick.