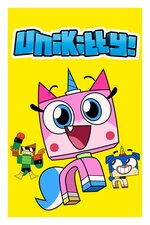 Unikitty is the ruler of the kingdom, and her days are busy with royal responsibilities. While she is very interested in making sure her people are happy, Unikitty is not one to be crossed. She has made it her life's mission to rid the kingdom of negativity. Unikitty is a kitty and unicorn hybrid who is full of endless enthusiasm and full of creativity. She is known to get angry whenever someone makes her little brother and best friend, Puppycorn, upset. Also living in the castle with Unikitty is Dr. Fox, who is a scientist, Hawkodile, who is a trustworthy bodyguard, and a 1x3 grey Lego brick named Richard. Unikitty and her friends must prevent Master Frown from taking over the castle and spreading sadness and negativity.