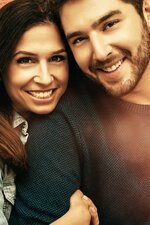 Based on a series of short films, the dramedy series "This Close" explores the relationship between 20-something best friends Kate, who is newly engaged, and Michael, who is attempting to move on from his ex-fiancé. Universal and relatable themes of love and friendship are touched on throughout the half-hour episodes, which are written by stars Shoshannah Stern and Josh Feldman -- actual best friends, both of whom are deaf. The ensemble cast includes Cheryl Hines as Kate's boss and Marlee Matlin as Michael's mother, a recovering alcoholic trying to reconnect with her son.