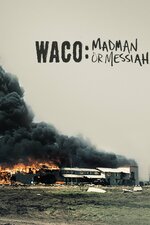 Find out where to watch Waco: Madman or Messiah tonight at the American Streaming Guide

Waco: Madman or Messiah is now available to stream and watch online:

Who exactly was David Koresh and why were so many people prepared to die for him? This documentary tries to answer that question by painting a psychological portrait of Koresh, the leader of the Branch Davidians religious sect whose Waco, Texas, compound was destroyed in a 1993 fire, killing 76 of its members, including Koresh. Via previously never-before broadcast audio and rare video footage, viewers hear from Koresh himself as well as first-person accounts from nine surviving members of the sect, including Marc Breault, described by A&E Network as "Koresh's right-hand man"; Heather Burson, who was the last child to walk out of the compound; and Kathryn Schroeder, who was one of Koresh's wives and the only female member to be charged and imprisoned after the fiery tragedy. Also, FBI agents detail their negotiation attempts with Koresh and his followers during a 51-day siege.