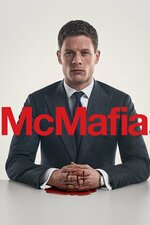 Alex Godman, the English-raised son of an exiled Russian crime family, has spent years trying to evade his family's past and live on the straight and narrow, running a legitimate business and mapping out a future with his girlfriend Rebecca. As he struggles against the lure of corruption and his family's former mafia connections, tragedy strikes and he finds himself drawn into the shadowy underworld of international crime, fighting for survival and revenge. "McMafia" is inspired by journalist Misha Glenny's best-selling book of the same name.