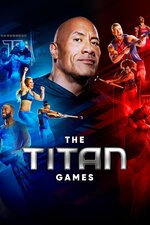 Following his deeply held belief that everyone has the potential to become their very best selves, Dwayne "The Rock" Johnson offers remarkable everyday men and women the opportunity to push themselves in extreme tests of strength, endurance and mental fortitude. These contenders square off in an intense best-of-three competition, with the winners battling it out against a pro Titan in the ultimate physical challenge on Mount Olympus for a chance to become the next Titan. In the final round, the Titans face off against one another in the hope of becoming the last male and female competitor standing.