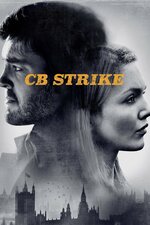 Find out where to watch C.B. Strike tonight at the American TV Listings Guide

Where can I watch C.B. Strike online?

Locally, you can stream and watch C.B. Strike online on HBO Go. Please note, HBO Go is a Subscription streaming service and you may need to register or provide your existing HBO Go login to watch.

Based on the best-selling novels by Robert Galbraith (aka J.K. Rowling), Tom Burke ("The Musketeers") stars as private detective Cormoran Strike, a former war veteran now working out of a cramped London office. Together with his assistant, Robin Ellacott, Cormoran tackles cases that have, so far, baffled the police. Though struggling with the psychological and physical toll that combat have wrought on him, Cormoran is well-equipped to delve into complex conundrums thanks to his background as a Special Investigation Branch investigator.