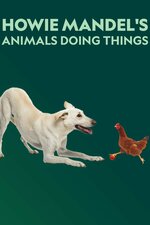 If the online age has proven anything, it is that people absolutely love to show off their pets. The internet has become a repository for animal videos, which generate millions of "clicks" that produce feel-good, fluffy giggles. One site in particular, Animals Doing Things, boasts close to 2 million followers, and the content found there is celebrated in this series. Host Howie Mandel collates video submissions from all over the world into hourlong episodes, each narrated with his signature comedy, that showcase animals doing amazing, adorable and hilarious things. Get ready for some viral video catnip, including dancing puppies, wrestling kittens, musical monkeys and acrobatic lizards.