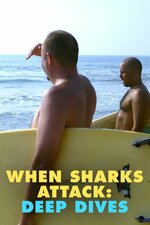 Add to my Watchlist
Find out where to watch When Sharks Attack: Deep Dives tonight at the American Streaming Guide

From the coast of America to exotic beaches around the world, the number of reported shark attacks has increased in the last half century, many of which are occurring in new and surprising places. In these enhanced episodes of "When Sharks Attack," experts investigate the chilling incidents in an effort to determine exactly what is affecting some of nature's most feared fish. The deep-sea saga employs underwater photography, news archives and testimony to deep dive into the mysterious and deadly attacks.