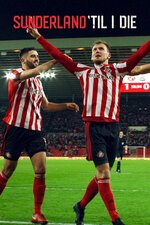 Sunderland 'Til I Die

The English city of Sunderland has seen its main industries of shipbuilding and mining fall by the wayside, which means the Sunderland Association Football Club -- SAFC -- has become an increasingly more important part of the lifeblood of the unique city. The club's fans are some of the most passionate and loyal in sports, but their passion is tested following SAFC's relegation. This docuseries follows SAFC and its fans in the club's first season in the Championship after the relegation. The stakes have never been higher as SAFC is in a downturn.