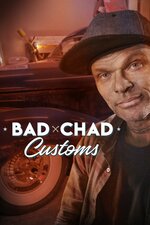 In rural Canning, Nova Scotia, sits a modest auto body shop whose proprietor has built a legendary reputation. He's known in town as a custom car artist "who can build a Bugatti out of a chicken coop," a neighbor says. Now, Chad Hiltz, aka "Bad Chad," is ready to expand his horizons, helped in no small part by this series that airs across North America. It shows how Hiltz incorporates literally anything into his car builds -- parts from boats, airplanes, even old lockers -- and uses basic tools and lots of ingenuity. Isolated and cash poor, Chad's creations spring from a mind that never stops. If he can imagine it, he will find a way to build it. The series also features, among others, Chad's shop manager and fiancee, Jolene, and son Colton.