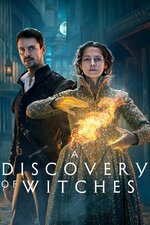 A Discovery of Witches

"A Discovery of Witches" is a fantasy series based on the similarly-named novel of the "All Souls" trilogy, written by Deborah Harkness. Reluctant witch/historian Diana Bishop discovers a bewitched manuscript in the Bodleian library. As she attempts to unravel the secrets this book holds about magical creatures, she is forced back into the world of magic, full of vampires, daemons, witches and forbidden love. Forming an unlikely alliance, geneticist and vampire Matthew Clairmont helps Diana to attempt to protect the book and solve the riddles within, while at the same time dodging threats from the magical creature world.