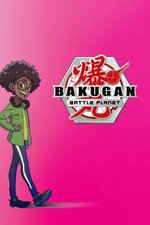 Find out where to watch Bakugan: Battle Planet tonight at the American TV Listings Guide

Where can I watch Bakugan: Battle Planet online?

Locally, you can stream and watch Bakugan: Battle Planet online on Please note, is a streaming service and you may need to register or provide your existing login to watch.

Bakugan began emerging from the earth's crust in a mysterious worldwide phenomenon called "awakening." Dan and his friends are at the center of this new era, where they learn that they have to look further than just fame in the post-Bakugan world. They use their knowledge to learn to work with their Bakugan to deploy them into battle to stop those who are looking to enslave, control and destroy the mysterious race of creatures. The friends seek to become heroes as they protect their Bakugan and Earth.