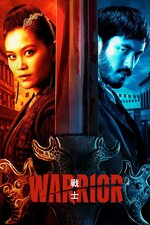 Where can I watch Warrior online?

Locally, you can stream and watch Warrior online on Please note, is a streaming service and you may need to register or provide your existing login to watch.

A crime drama that takes place in the latter half of the 19th century during brutal gang wars in San Francisco's Chinatown, it follows martial arts prodigy Ah Sahm, a Chinese immigrant who arrives in the City of Lights under mysterious circumstances. Once he proves his prowess as a fighter, Sahm becomes a hit man for one of Chinatown's most powerful organized crime families. As he is mentored by the son of the crime family's leader, learning the ins and outs of gang warfare, Al Sahm wins the confidence of brothel madam Ah Toy, eventually revealing to her his true intentions. "Warrior" is based on the writings of martial arts legend Bruce Lee and features a largely Asian cast.