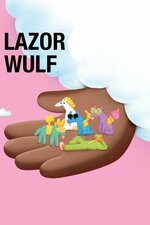 Animated by Bento Box Entertainment, "Lazor Wulf" follows a crafty wolf who carries a laser on his back. Lazor Wulf goes on a series of adventures with his carefree friends while hanging out at The Clurb, Esther's and other neighborhood hot spots. This hilarious cartoon also highlights the important things in life -- like how to buy cereal, how to avoid dying, and the art of the scam. "Lazor Wulf" showcases Staple's unique deadpan humor and the stoner culture which centers on the city of Strongburg.