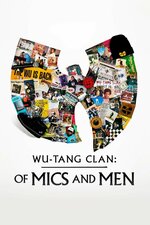 Wu-Tang Clan: Of Mics and Men

Add to my Watchlist
Find out where to stream and watch Wu-Tang Clan: Of Mics and Men at the American Streaming Guide

Wu-Tang Clan became a household name in rap/hip-hop circles soon after releasing its seminal debut, "Enter the Wu-Tang (36 Chambers)," in 1993. To celebrate its 25th anniversary, a four-part docuseries from filmmaker Sasha Jenkins looks back on the group's career, combining reflective interviews from each of the nine living members with never-before-seen archival footage and performances. Founding members RZA, GZA, Ol' Dirty Bastard, Inspectah Deck, Raekwon the Chef, U-God, Ghostface Killah, Method Man, Masta Killa and Cappadonna used ingenuity and entrepreneurial spirit to overcome the poverty and violence of 1970s and '80s Staten Island and Brooklyn. But it was music and their shared lyrical prowess that allowed them to form perhaps the most recognizable musical movement in the world.