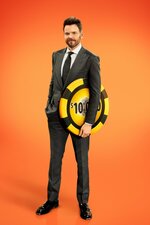 The road to glory and riches begins with two players facing off in a head-to-head elimination race, with the winning player claiming a $10,000 cash prize and getting a chance to turn that amount into a life-changing payday. The anticipation builds as the winning contestant risks the prize on predicting seven final cards. The player leaves the game with whatever amount of money he or she has in the bank after the prediction, and results are revealed with the flip of the seventh and final card. Joel McHale hosts.